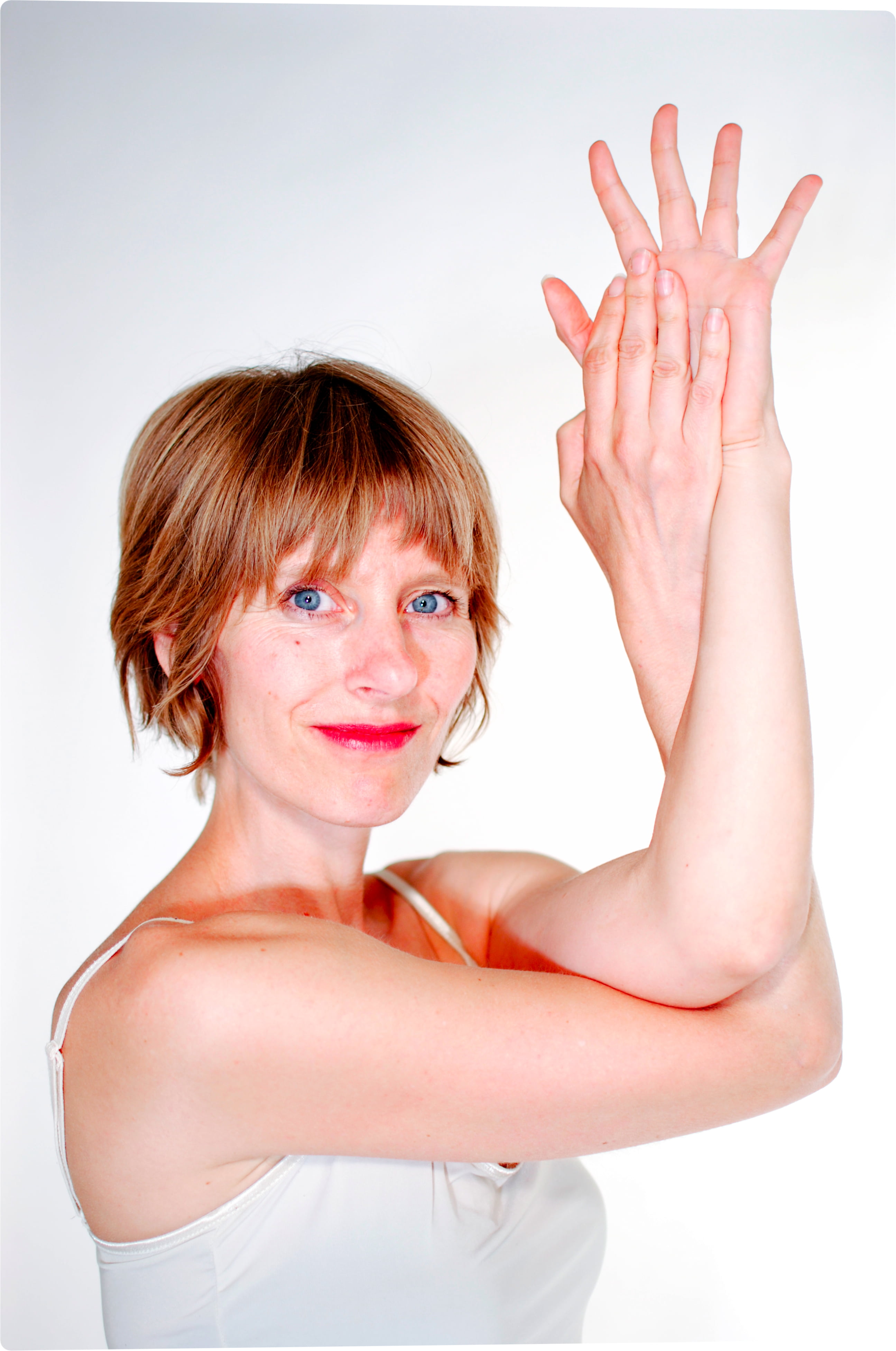 Last fall, I did my first ever workshop in Winnipeg, Manitoba. You can read about it here: day one, day two, day three.

And I sort of fell in love with the town – particularly the hippie neighbourhood of Wolsley.

One of the people who made my visit possible at all was a wonderful woman, mother and yoga teacher named Beth Martens (pictured right). As we got to know each other and discuss this whole idea of niching for her business a niche came up for her that felt so true: caregivers.

What you’re about to read is a gorgeous example of the power of empathy and becoming a hub.

So recently we had a little chat about how that was going for her.

How long have you been teaching yoga now and what got you started with it?

My yoga practice is going on 20 years, beginning in Mysore, India when I took my first of eight trips there to study yoga, meditation and kirtan.  I’ve been teaching yoga and leading kirtan full time since 2003, upon recovering from Hodgkin’s Lymphoma.

I began with this practice because of a life-long attraction to practical spirituality.  I was totally disillusioned with religion and social control, but discovered quickly that the spiritual arts can be very personal and guided by a system at the same time.

I ended up in India almost by default, choosing a last half credit to graduate my undergrad degree in anthropology, taking a one-time-ever course in meditation for credit, and then feeling attracted to leave the academic behind and get my own feet in the ocean of life.

When I discovered that yoga is even bigger, more all-encompassing than anthropology, I traded “up” for the direct experience of all the stuff I’d read and heard described.  I wanted to see for myself what the science experiment in consciousness itself could hold for me.

You’ve recently been exploring focusing on the niche of ‘caregivers’. Can you tell us what prompted that – what was the need you saw in your community that gave you this idea – and how does that connect to your own life?

Carving out a niche was on your advice, and I really and finally got the point, that trying to be everyone’s singing yoga teacher was costing me too much energy, scattering my limited marketing efforts and making me feel overwhelmed enough to not promote at all.  Choosing a niche that genuinely matters to me makes me feel alive and energized in the communication and though still overwhelming, I don’t get stuck with that daunting, “where do I begin?”

You’ve also been a good model for supporting and uplifting one another in our small earth and consciousness-friendly projects, and seeing how high we can fly when forces are combined, competition removed from the foreground, and co-operation fully engaged.  It’s way more fun and has the fantastic side effect of making me feel connected with my community.

I also feel it was career transforming to hear you speak to the need for marketing plans to reflect community needs, to actually bring people together and to treat that growth like the real measure of wealth.  I was tripping on and off that idea vicariously, where now it’s an integral part of the game plan as well as  instructions to students. Thanks Tad!!

As I mentioned I had a three year struggle with my health, cancer of the lymph, that caused me to ask life’s big questions, and forced me to come up with answers, as my life was at stake.  In those years I was in need of and very close with several caregivers, and saw first hand what they were going through in efforts to help me save my own skin, not a little thing.

After recovering I also walked with several family members through their own scary illnesses, and now am the single mom of a young son.  When creating this niche I didn’t even see myself in the role of caregiver, but started getting lucid as I was reading and writing about the symptoms that this group share, no matter how they came to the role.

And they do indeed share stuff, mainly including a sense of energy depletion, reduced immunity and social isolation.  Caregiver is a role many will default into suddenly, rather than choose, so that creates a whole level of crisis-style lifestyle management that can go on at that crisis pace for years.

As our health care system becomes more and more weighed down demographically, as our society becomes less and less adept at caring for ourselves and each other, caregivers are left to pick up the pieces, survive on behalf of their loved ones and carry extraordinary and heroic-level burdens.

The deeper I looked into caregivers’ mostly silent journey, and realizing they have very little support systemically, the more I began to emotionally engage.  I recently, for example, re-friended someone I hadn’t heard from for 15 years because her husband had a severe stroke and I was ill at the time.  She is lucky enough that a decade of care to him has resulted in some recovery and she is regaining some lifestyle freedom, but for ten years, her personal life did not exist.

It makes these people desperate for some sense of connection with others that get what they are going through, and hungry for chances to take care of themselves for a change.  I find caregivers’ stories riveting and almost unbelievable testimonies to the enormous power of the human spirit.  And that makes me want to be of service to this group.

What is it that you’re offering these caregivers?

In the short term I’ve created workshops called Yoga Cream Pie as an answer to what ails caregivers, both physically, spiritually and socially.  This currently three-hour workshop is a refuge for caregivers, where they will get a chance to enjoy a yoga practice that is not only good for them, but feels amazing and makes up for the inevitable pleasure deficits that follow being isolated, literally stranded on the desert island of their obligations.

The session includes supported and restorative yoga, as well as massage while they are in these already delish poses, with the live music called kirtan, India’s ecstatic chant tradition.  I also give them some time at the end to meet at least one person in the group with whom they can identify, share something about themselves and realize that they are in fact, not alone in their caregiving experiences.

People come to these sessions looking haggard, drawn, depleted.  They likely rushed there, begged and borrowed to get the time and have a huge hope that they are not wasting their precious time off.

After the session, which always seems so short, participants leave refreshed, with more energy than when they arrived, they have got their bodies gently opened, lovingly worked-upon with healing hands of an RMT and filled with the magic mantras that are the food for my own healing journey.  Their faces are the most telling of the benefit, looking younger, more relaxed and so much happier.

And this is just the beginning of what I have envisioned.

What’s the response been?

I’m a little slow in the start up of this project, but the response has been awesome with the hubs that I’ve contacted, related to caregivers.  I’ve received nothing but good feedback from the multitude of organizations that come into vicarious contact with caregivers, because there on the front line, they know that the caregivers need to be not just recognized, but supported. And they have nothing or little to offer, being almost entirely client and patient focused.  A focus on caregivers hopefully will reveal that care is a community responsibility, and that caregiver shouldn’t mean one individual, but rather a whole team of help and love.”

The participants who have tried Yoga Cream Pie all reflect my own personal experience of finding this restorative yoga therapeutic montage to be a very efficient way to spend time, a self-spa that also includes a sense of being personally entertained, with genuine care for the soul built right into the mix.

Here’s some feedback I got at the YCP we ran on the weekend:

Subject: That was great
I feel nourished and restored and relaxed. That was a wonderful session and you have a lovely voice…thank you for a very enriching time! And the massage was a lovely, added bonus!  Thank you.

What kind of marketing has worked best so far?

I was lucky enough to get some help with a little publicity, and therefore my credibility.  Here’s a sample from the Winnipeg Free Press who published this article in their Prime Times tabloid.

I also did an interview on CKUW campus radio, a small listening audience, but which provided a great opportunity to tell the story behind YCP in length.

I also did several internet-based, Blog Talk, radio interviews that have the same magic effect of being able to distribute a feature far and wide to interested peeps.

In addition I built four brand new websites, so that Caregivers’ Refuge could have its very own URL and presence, another reflecting my ‘straight’ yoga classes and workshops, one for the live and recorded kirtan music I do as well as my own name-domain that serves as central hub for all the stuff I do.

That way when people arrive at my site, there is no confusion for them as to what they will discover there.

I rely heavily on social media and the tendency to SHARE, which has helped me connect with this rather large group, but who have often not identified themselves as a caregiver.  Being able to share a caregivers’ experience in sound bite, digestible bits, has helped a lot as an education forum as well as advertising.

And then from there, Yoga Cream Pie has been growing been word-of-mouth, through the building of relationships and trust with caregivers that are in my community.  Interestingly, anyone who offers me help these days with my work and caregivers mission, are themselves a caregiver, someone who can relate to what I’m doing and to the potential that it holds. Just today, I signed on with one of the internet deal offer website companies, WagJag, to make a special offer on the Yoga Cream Pie.  I recently had a big success with a not-niche, mainstream yoga offer on Groupon and sold 180 yoga packages in two days, notwithstanding the very deep discount.  I am super curious to see if the caregivers are going to respond to an offer custom made for them.

One thing about caregivers, because of their isolation, is that they are internet busy and savvy.

What are the top three lessons you’ve learned along the way?

Not a lesson so much as a discovery: Caregivers make amazing friends.

If you feel like you’re a caregiver and could use some support – Beth wrote an ebook on the Seven Secrets of Avoiding Caregivers’ Burnout,  it is available for free download when you sign up for the Caregivers’ Refuge newsletter at www.caregiversrefuge.ca.

Want Help? If you’d like some more direct guidance and hand holding on figuring out your niche then go and check out my Niching for Hippies coaching program https://marketingforhippies.com/niching-for-hippies/