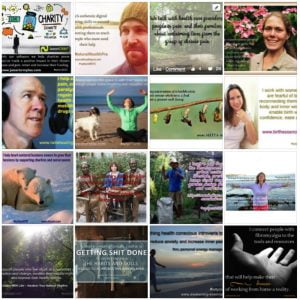 I am thrilled to announce the winners of the 2015 So You Think You Can Niche contest!

Backstory: for four weeks between July and August I invited people to submit their niche summed up into 140 characters (that’s the length of a tweet!), and then that they rate at least five other people’s niches from 1-10 and offer feedback to one another.

The results were fantastic. We had 74 niche meme entries, over 350 Facebook “likes” on those entries and 950 thoughtful, constructive comments.

I am deeply happy and encouraged by the quality of content and interaction. In addition to being fun, the So You Think You Can Niche contest for 2015 has been a wonderful platform for learning and a genuine success.

And the winner is:

Fatima received an overall rating of 10, and of the six overall 10’s in this contest, she had the most ratings in comments – thus making her our winner and proving that the amount of genuine, thoughtful, rated feedback really did matter! My sincere congratulations to Fatima – she entered a super clear niche for her work coaching Muslim women.

Fatima will take home the first place prize of a 90-minute coaching session with me ($450 value) + she’ll be featured on my blog in the future + a $100 gift certificate at her favourite locally owned restaurant + a free hard copy of my book The Niching Nest.

I held this SYTYCN contest last year, and all the niches/memes from 2014 and their incredible collection of feedback has been made into a powerful resource on my NichingSpiral.com site.

You can search this database of Niching Case Studies based on rating so that you can see strong, evolving or weaker examples of niches with clear feedback on what is making them work or not work. You can also search the tag cloud for specific categories of niches.

The memes and niches from this 2015 contest will be added to the Niching Case Studies database this fall, so stand by for that resource to expand generously.

Dana da Ponte and Katya Sarmiento. Each of these women received a 10 rating overall and had the 2nd and 3rd most comment ratings of all the 10’s. They will each receive a 30-minute coaching session with me + an electronic copy of The Niching Nest.

The lovely SYTYCN contestants who placed 4th through 10th each wins $100 off my next Niching Spiral Homestudy Course (a discount the winner can use or pass onto others). The tie-breaker for niches with the same rating was number of comments offered on that niche.

My congratulations to these folk:

BEST MEME AWARDS go to people who created an eye catching, easy-to-read meme that really echoed their work or offering. Each of these people wins $100 off my Niching Spiral Homestudy Course (a discount the winner can use or pass onto others). This is a subjective category – I’ve looked at a lot of memes in my time and I chose memes that were striking and memorable to me, that were clear and welcoming and made sense with the niches they are supporting. And the winners are:

THE BEST COMMENTS PRIZES go to the people who gave the best, most useful and insightful feedback to many others in the SYTYCN contest.

They each get $300 off my Niching Spiral Homestudy Course – because they’re the kind of people I want in it.

Thanks for the amazing effort and deeply thoughtful feedback folks, my congratulations go to:

Lastly, you’ll find the  list of the final ratings for everyone who entered the contest below.

Please note that the calculation was made by finding the average score of a niche/meme’s ratings and averaging that total with my (Tad Hargrave’s) rating. Congrats and thanks to all the lovely contestants!