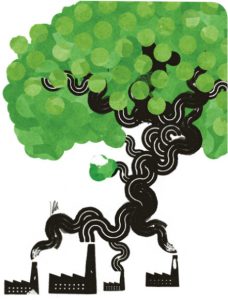 I do marketing consulting for hippies.

I work with green, eco-friendly, holistic and otherwise conscious entrepreneurs to help them get more clients and increase their cash-flow. I help them find sustainable livelihoods doing the things they love.

And I have a confession.

I don’t think the Green Economy is sustainable.

I don’t think it’s the answer. In fact, it’s part of the problem.

These days you can’t go two steps without seeing the word ‘green’ being tagged onto some product or service. Magazines have their ‘green issues’, businesses are going green, Walmart and other huge companies are seeking to reduce their environmental footprint, every time I’m out at the organic food store I see some new eco friendly cleaner, some new organic/raw/vegan/alkalizing food bar.

And I’ve got mixed feelings about it all.

The Green Economy is a bit like Barack Obama.

Last week someone asked me what I thought about the Obama Presidency. I told them,

“Well . . . It’s new, fresh, inspiring and makes you feel good. But . . . it’s not sustainable. Is Barack Obama a good thing? Well, what we can say for sure is that his Presidency is less shitty. Profoundly and deeply less shitty than Bush’s presidency. So much less shitty that it’s worth celebrating for months. But, can the corporate, nation state structure of the USA ever be sustainable? I don’t think so.”

And neither can the Green Economy.

After all, no one wants pollution of our land, waters, air or energy sources . . . but that’s exactly what we have. We have to face the sobering fact that we are collectively creating what nobody wants individually.

It’s become increasingly clear that the seemingly disconnected, vast array of problems we face are not in fact separate at all but merely different outgrowths of the same system. And it’s a system that is rotten to its core. The same core set of assumptions. The same worldview. This system has been labled a lot of things: Empire, Civilization, The Suicide Economy, Modernity.

The Suicide Economy is one of my favorite because it states the issue so clearly.

A bloke walks into a Glasgow library and says to the prim librarian,

‘Excuse me Miss, dey ye hiv any books on suicide?’

To which she stops doing her tasks, looks at him over the top of her glasses and says,

Investing in this economy is like that. The returns are an illusion. You never really get them back.

To create alternatives we must understand the system that is already dominant.

To create solutions we need to understand the problem so that we don’t recreate it.

And, as the analysis of the world the problem gets clearer a solution is emerging – The Green Economy. And people are getting very excited about it.

This is the answer, many would suggest, that we’ve been searching for. When many people encounter the Green Economy they often feel this sense of having arrived “home”. It seems so simple and clear: problem/solution.

But I’m wanting to complicate that conversation a bit more.

And, this distinction between ends and means is important.

If our goal is to be happy and healthy and create just, thriving and sustainable communities then we need to get serious about how to create those. As David Korten puts it, “We can’t talk the alternatives to death. We need to live them into being”.

The challenge is immediately apparent: many of the solutions don’t work. They won’t take us to where we want (and need) to go. For example: a lot of folks in the social entrepreneurial field seem to see the “Green Economy” as the endgame (rather than a means to a deeper transformation).

I was talking with a friend a number of years ago at a Second Cup Café. He was, and really still is, a hardcore capitalist business man. But this new more conscious economy was waking him up. To the smell of dollars anyway. This new green economy is full of chances to make money.

“You got to admit,” he said, leaning forward, holding the now ubiquitous soy chai latte in both his hands, “The green economy is more sustainable than what you’d call our current Suicide Economy.”

Of course, he was right. I sat for a while, sipping on my own chai latte (don’t you judge me . . .) and ruminated on his words before responding.

The Green Economy goes far, but does it go far enough?

Are we letting the good come at the expense of the best?

A few weeks ago I’d bumped into a neighbour of mine Mark Anielski, author of “The Economics of Happiness”. I told him that I’d just spoken at the Greenfest (the world’s largest green business consumer expo). “My friend just spoke there! And she told me that she just went off about how the Greenfest wasn’t much better than the mainstream. Just a green capitalism.”

I liked her already. So, I emailed an early draft of this piece to her.

She responded, “Yes I did “go off” on the whole shocking insanity of the event…. I was blinded by the flash of visa cards and when the radio interviewer asked me if I wasn’t just so delighted to see such a fantastic expression of sustainability I burst into tears right on live radio and said “WE can not eat our way out this mess… one can not buy their way to the salvation of the mother… this is an abomination… everyone here is on dopamine and is walking around in a trance… a consumer trance… we are doing nothing but selling a new drug that is organic… and it is the same drug addiction and core problem that is keeping everyone asleep and trapped… it is a grand co-opting of the change… it is like giving a heroine addict a new drug and saying” don’t worry you can do this one without feeling badly about it cause it is organic!!!” I was in shock.”

Perhaps the first place to start is to acknowledge that there is something beyond the Green Economy. And to work for that.

What do you think it is? What comes after the green economy? If it’s not the Suicide Economy and it’s not the Green Economy . . . what is it?