Abstractly it seems like a good thing to have.

But talk to most conscious entrepreneur types about doing one of the central things that will open the door to more of it appearing in their lives?

Money is fraught for everyone in this culture. We’ve all done things with money we regret. We’ve all had people use money against us in ways that didn’t feel good but… add a social, political and spiritual analysis to this?

You’re about to watch a 26 minute video (it’s worth your time) about this thorny topic of raising your rates. My guess is that you’re walking into it with some level of confusion around not only how to do it but if you should at all.

Of course, this comes often in my workshops and whenever people lift up this topic with all of their halting, “But is it right?” and “What about the federal reserve?” and “But what about class dynamics?” I want to fall on my knees and kiss their feet for being willing to even think about this stuff because most people don’t.

What must be faced is that we who are living in the dominant culture of North America, live in a mad culture. It’s a culture of hyper individualism where village-making is sorely needed. It’s a culture where the gifts we might freely give to each other in a healthy culture (e.g. affection, listening, cleaning) are turned into services that are charged for. That’s how it is. You are unlikely to solve that on your own. And yet you want to. And yet the bills. And yet and yet.

So what do you do?

The first thing that must happen, is to have reality-based conversation about money and what we charge. As Lily Tomlin put it, “I can handle reality in small doses, but as a lifestyle, it’s much too confining.” It’s a good laugh but most of us have also confronted the limitations of illusions too and the ways that refusing to face the truth ends up being an inescapable jail built of everything we refused to consider with bars crafted from everything we’ve banished from view.

We need to talk honestly about money and what it takes to sustain us.

This is a topic I’ve thought about a great deal. I wrote an eBook called Who Am I To Teach and Charge Money For It?

One of my most popular blog posts is entitled Why Charging What You’re Worth Is Bullshit.

My next eBook will be me sharing how I’ve managed to lead almost all of my live daylong and weekend long workshops on a pay what you can basis since 2005 (and done well financially from it). 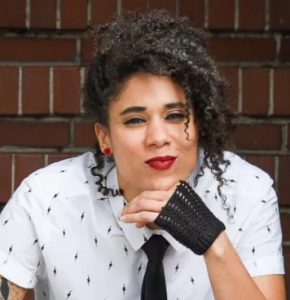 But, having said all of that, this is not an area I have focused on deeply. It’s not a place I feel the most solid in offering advice.

But, as good fortune would have it, life introduced me to a good woman named Tiffany McLain (pictured here) who sent me an email of appreciation about a blog post I’d written and telling me she was planning of writing an article inspired by it. Which she did.

I went and checked out her site and was delighted to see her focus on helping therapists raise their rates.

I dug about a bit and asked her if she might submit herself to an interview for my blog. I was about to hit the road and I sent her the following questions.

She sent me, in response, the video below which was put together with so much care, thought, humour, candour and love that… She’s officially one of my new favourite people.

We would both love to hear your thoughts, reflections and further questions in the comments below.

You can listen to the full audio of the interview here, starting with a bonus track of Lisa Hodgson singing Dark, Dark … END_OF_DOCUMENT_TOKEN_TO_BE_REPLACED

Mighty Network is currently building me a membership site MarketingForHippies.com. I've written about 16 eBooks, have … END_OF_DOCUMENT_TOKEN_TO_BE_REPLACED

Rachel joined my Mentorship Program a couple of years ago. She is a healer from Victoria who struggled, as many healers … END_OF_DOCUMENT_TOKEN_TO_BE_REPLACED

Kellita was one of the first people to join my Mentorship Program and, if I’m honest, one of the dearest to me. Kellita … END_OF_DOCUMENT_TOKEN_TO_BE_REPLACED

Sitting around a fire and telling stories at night time. This must be one of the most ancient, enduring and … END_OF_DOCUMENT_TOKEN_TO_BE_REPLACED

One day, I plan to write an eBook called Vibe: The Hidden Mechanics of Why People Buy. It would center around the … END_OF_DOCUMENT_TOKEN_TO_BE_REPLACED

By Julie Wolk These are challenging times to be sure. I have certainly been on an emotional roller coaster these past … END_OF_DOCUMENT_TOKEN_TO_BE_REPLACED

How do you avoid burn out as an entrepreneur? Over the years, I've gathered a number of ideas and this post is me … END_OF_DOCUMENT_TOKEN_TO_BE_REPLACED

In December of 2019, my dear colleague George Kao and I sat down to talk partner marketing and hub marketing together … END_OF_DOCUMENT_TOKEN_TO_BE_REPLACED

Figuring out your Ideal Client. What's the big deal? Why bother? One of the big reasons is because this work can … END_OF_DOCUMENT_TOKEN_TO_BE_REPLACED

Years ago, I read the book Monopolize Your Marketplace. Though the title and tone is aggressive, it has … END_OF_DOCUMENT_TOKEN_TO_BE_REPLACED

There are, in my mind, three roles of marketing. The first is to get their attention. The second is to filter and … END_OF_DOCUMENT_TOKEN_TO_BE_REPLACED

A few years ago, I recorded a video entitled Why I (Almost) Never Do TeleSummits. I recorded it so that I'd have … END_OF_DOCUMENT_TOKEN_TO_BE_REPLACED

If you've followed my work for a while, you know that I'm all about niching. I even created a whole … END_OF_DOCUMENT_TOKEN_TO_BE_REPLACED

By Julie Wolk Does hiring an assistant for your business feel like a totally dreamy, yet impossible fantasy to … END_OF_DOCUMENT_TOKEN_TO_BE_REPLACED

As you begin to develop your business model, it is helpful to begin with the end in mind. What's your most … END_OF_DOCUMENT_TOKEN_TO_BE_REPLACED