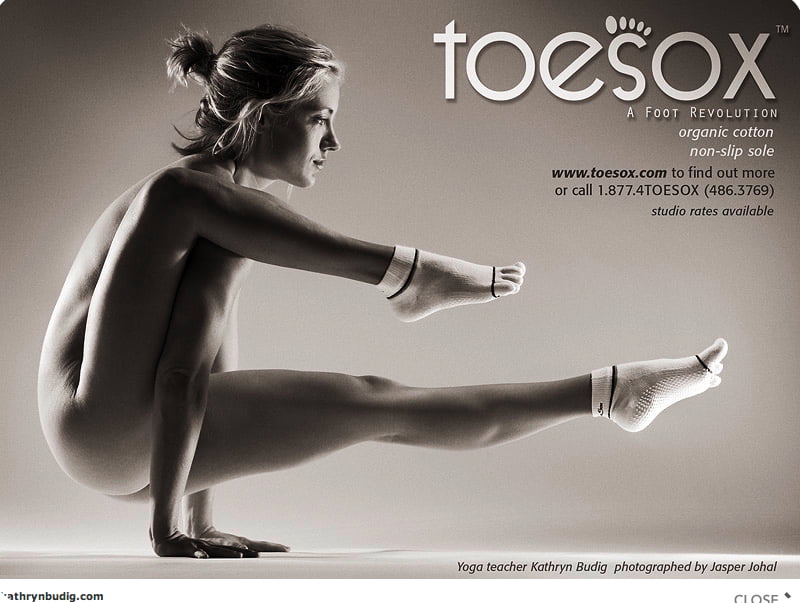 Just read a fascinating article about the ways that sex is used to sell yoga.

It’s becoming more and more common to see photos not unlike the one here in yoga ads or on yoga products. The article is fascinating . . .

The Oversexualization of Yoga

By the standards of women’s fashion magazines, there is nothing particularly racy about Yoga Journal. Stories in the October issue include a step-by-step illustrated guide to achieving poses, versatile yet stylish clothes to wear outside the studio, nourishing beauty rituals and a recipe for dosas.

Toward the back of the magazine, however, there’s a black and white Toesox ad featuring well-known yoga teacher Kathryn Budig in a variation on a handstand. Apart from a pair of the organic-cotton non-slip yoga socks, she’s naked, strategically positioned to reveal no body parts that would be considered scandalous on Sesame Street.

But while the image, shot by respected fitness photographer Jasper Johal, is unquestionably beautiful, not everyone was happy to see the practice of yoga portrayed in a sexy, commercial context.

Judith Hanson Lasater, a leading voice in the yoga world and one of the founding editors of Yoga Journal 35 years ago, wrote a letter to the magazine that ran in its September issue. In it, she expressed her sadness and confusion over the “photos of naked or half-naked women” and how they relate to the practice of yoga. Yoga blogs and message boards jumped on her response, mostly in agreement.

“Hats off to Judith for having the courage to speak out against sexualized yoga advertising!” wrote Montrealer Roseanne Harvey on itsallyogababy.com.

Since yoga first became popularized in North America in the 1960s, its growing mainstream appeal has to some extent overshadowed its meditative origins, placing greater weight on its body-enhancing abilities than on goals of the mind or spirit. This idea of yoga as just another pastime – and its emergence as a significant business opportunity – has created a widening grey area between commercialism, sex and the discipline, fuelling concerns about whether the centuries-old discipline is getting proper respect.

These days, there are books and DVDs promoting yoga as the answer to a better sex life, hybrid classes that emphasize mojo over mantra and myriad studies suggesting yoga can boost sexual performance. The proliferation of flirtier attire, from Lululemon bra tops to Yoga Tart booty shorts, underlines the sexual aspect. In movies and on TV, a yoga class often serves as a pick-up joint.

“Yoga is a sensual, body-based activity and there’s a lot of potential for beautiful bodies and a lot of skin, so it can be exploited by people who want to market it,” says Vancouver teacher Eoin Finn. “When I hear the term ‘sexy yoga,’ I don’t picture spiritually ascending; it might be fun, but there might not be [any] spiritual thrust to it.”

Ruth Ann Dargan, the Oshawa, Ont.-based director of the Yoga Conference and Show, currently under way in Vancouver, agrees that yoga’s spiritual focus can be diminished in a sea of sweaty, provocatively clad hard bodies. “In the yoga class, we would wish to remove [anything] creating an arousal of desire or distraction, thus providing a more fertile environment for awareness and management of physical, mental and emotional sensations.”

Now that yoga has permeated the mainstream and is being adapted in many different ways, it’s easy to see how its original intention could be lost on newcomers. “Everyone thinks they know what yoga is and it’s become just about asana [poses] and body,” says Hanson Lasater, the former Yoga Journal editor. Yoga’s true goal, she says, is self-awareness. “[Nudity] is a natural thing and not a bad thing,” she adds. “I love beauty in all its forms, but is this objectification what we want to combine with yoga?”

Not that practising yoga and enjoying sex are mutually exclusive – it’s all about context. “The idea [behind yoga] is not to remove distraction or desire from our life,” says Dargan, “but to learn to mindfully self-manage and direct them.”

Kaitlin Quistgaard, Yoga Journal’s editor-in-chief, doesn’t think readers are necessarily prudish or unaware of the way advertising works. “It’s that they’re protective of yoga,” she says from Sebastopol, Calif. “They might subscribe to Yoga Journal and also to Vogue … and have different expectations.”

Yoga has become a big business, generating $5.7-billion in U.S. sales in 2008, according to Yoga Journal, and ensuring not everyone making money from it is a disciple.

Garvey Rich, the New York-based founder and creator of both the Yoga Tart clothing line and the Better Sex Through Yoga books and DVDs, is both an entrepreneur and a long-time yogi. And he embraces the sexual crossover. Rich hatched the idea for his DVDs in 2002, when he realized that his experiences in the bedroom were heightened whenever his partner also practised yoga. Yoga Tart, with its belly-baring ballet tops and provocative hot pants, came soon after. “It always amused me how puritanical some of the situations were in yoga studios,” he says. “Some people say the products are so targeted toward sex and, to me, it’s unfortunate that sex has a bad connotation. If you think about all the times that you have sex, those are great times.”

Indeed, practising yoga has proven physiological benefits in the bedroom, says the Yoga Show’s Dargan, who has been training teachers for over 15 years. “[It] brings the body back into its natural alignment and strengthens the muscles of the pelvic region,” she says. But as Yoga Journal’s Quistgaard points out, back bends and twists aren’t really conducive to lustful thoughts. “When doing the practice of yoga, it would be pretty hard to be focused on anything [else]. We live in this modern world where people care about their clothes and what they look like when they walk out the door, but that seems to me to be something different than what happens when on the mat. And I would go so far to say that if you are so focused on what you look like and what other people look like, you’re not in your practice.”

Dargan would like to see yoga regulated and licensed in Canada, partly to circumvent some of the confusion about what does and doesn’t qualify as germane to the practice, from props to novelty classes. Quistgaard doesn’t go that far, but does admit the myriad interpretations of yoga don’t make settling the sexual discussion any easier.

“People who devote their whole life to it can’t agree on definition, so of course the general public will be at a loss. That’s what fuels the issue. Is it yogic to have an advertisement that features a naked woman? There’s no counsel of yoga judges to go to.”

What do you think? Where is the line in this? When is sexy fun in marketing? When is it too much with an ancient, spiritual tradition?