The following is an excerpt taken from an interview I did with the brilliant Robert Middleton. A lot of my core marketing philosophy, I got from this man. This material will be compiled into a book called “Pay What You Want” in 2011.

Robert: What are some of the mistakes that you might make with Pay What You Can? What have you seen?

Tad: The biggest one I call the “Put the Money in the Basket.” People will do an event or concert or whatever it is. Then they say, “Everybody, thanks for coming. Thanks so much. There’s a basket at the back of the room. Put some money in it if you want to put some money in. You don’t have to. There’s no pressure. Please, don’t bother. You’re probably broke. Don’t put any money in. It’s cool. In fact, if there’s money in the basket and you need some, just take some out. In fact, I have $5 here. Who wants some money?”

There’s this crazy awkwardness about it, and it’s very disorganized. There’s so many challenges with that. One of the biggest ones is you’ll have people who want to give you money who will just forget.

They genuinely are like, “I’m going to give $20.” They’ll have it in their hand and walk by. They just get caught up in a conversation. They’ll feel bad about it later. So there’s that.

Robert: So don’t do that. 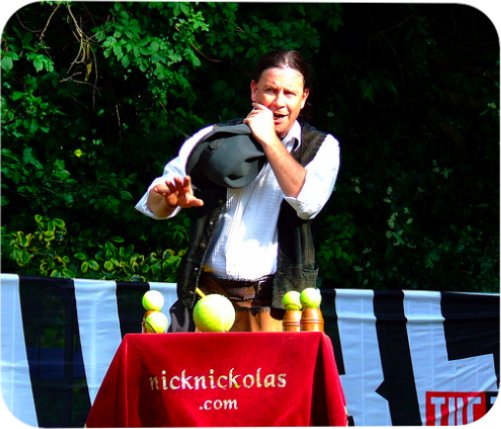 I asked him, “Nick, what do you say is the biggest mistake street performers make when they do their pitch? “He said, “They save too much of it for the end. They do this whole show and then there is this whole thing. If you watch my show, you’ll notice that I’m sort of doing the pitch throughout the show.”

So he’ll do a trick, and he’ll be like, “An old lady saw me do that trick, and came up to me and said, ‘I like that. That show was really good. That show was worth $5.’” Then he looks at the audience, “I just thought I’d point that out.”

Robert: He’s priming the audience for them to expect that he’s going to ask for some money, but it’s going to be reasonable.

Tad: Yeah and he’s also saying, “Here’s what I think it’s worth. Here’s what you’d pay anywhere else.” He gives a number of examples throughout the show.

In the sales letter and in the flow of the weekend, I’m making reference to it. I’m saying, “I was at this Jay Abraham marketing workshop. It was $5,000 for five days, and he had 600 people there.” I’m using it to illustrate the principle of risk reversal, but I’m naming that so there’s some understanding as we go through.

I think another mistake people make is pretty rare, but I’ve still seen it. People say it’s basically a free event, and then they pass the hat at the end. That’s terrible. Or they charge something at the door and then do a pass-the-hat as well. That’s a terrible mistake.

Also a mistake is giving no context for what it’s worth and then being shocked at how little they receive at the end. It’s like I do a whole weekend, but if they have no idea what to pay, they will generally pay like $20 or $50. There’s got to be a context.

And not developing their back end. Pay what you can is great, especially as a lead generator, but like you’re saying, they may go through the weekend and then decide to work with you one on one or sign up for an advanced thing. It’s really important to think about what’s going to happen after.

Robert: In marketing we call that the back end. The front end is the initial sell. The back end is long-term sales and business that you generate.

Tad: I think it really is a mistake to think about doing everything as a Pay What You Can. It just isn’t going to be appropriate in every situation.

I think a mistake, too, is giving up after one event because it didn’t make the money they thought they deserved, versus getting really curious. “How can I tweak this to make this even better and make it more valuable?”

I think actually one of the bigger mistakes is when people who are using Pay What You Can treat it too casually. It’s sort of like, “Pay whatever you want,” versus really, especially in a workshop setting, creating the space to talk about it. I take about half an hour at the end of my workshop to talk about money and to talk about the payment for the workshop.