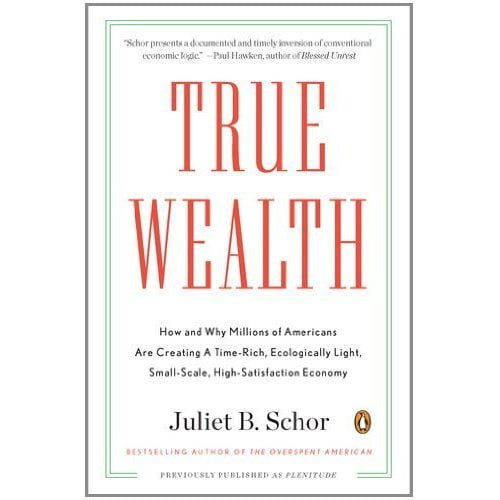 I was in Vancouver a few weeks ago and my friend Jackie told me about a new book she was reading called ‘True Wealth.’ (originally titled ‘Plenitude’) She gave me the basic run down and I loved the messaged.

So I emailed the author and she kindly sent me an excerpt to share with you. Thanks Juliet.

Excerpt from Chapter One

The financial system came frighteningly close to a total collapse and was saved only by government guarantees and massive injections of cash. An astounding $50 trillion of wealth was erased globally. Economic pain drove people into the streets around the world, from Iceland to Greece, Egypt to China.

Since then, the global economy has been rescued, but it hasn’t been fixed.

That will require fundamental changes.

Climate destabilization, economic meltdown, and the escalation of food and energy prices are warning signs from a highly stressed planet. Ecologists have defined a number of safe operating zones for the earth’s complex systems and are finding that human activities have already led us outside a number of them. But the mainstream conversation has been stalled by fatalism. We’re better at identifying what can’t be done than what we need to accomplish.

There is a way forward, and I call it plenitude.

The word calls attention to the inherent bounty of nature that we need to recover. It directs us to the chance to be rich in the things that matter to us most, and the wealth that is available in our relations with one another. Plenitude involves very different ways of living than those encouraged by the maxims that have dominated the discourse for the last twenty-five years. It puts ecological and social functioning at its core, but it is not a paradigm of sacrifice.

To the contrary, it involves a way of life that will yield more well-being than sticking to business as usual, which has led both the natural and economic environments into decline.

The version of plenitude that I describe here is addressed in large part to inhabitants of wealthy countries and wealthy inhabitants of poor ones. But most, although not all, of the principles of plenitude and the economics underlying it are also relevant for lower-income households in poor countries. In its general outlines, if not specifics, it’s a widely applicable vision of economic life.

Creating a sustainable economy will take decades, and this is a strategy for prospering during that shift. The beauty of the approach is that it is available right now. It does not require waiting for the clean-tech paradigm to triumph. It doesn’t require getting government on board immediately.

Anyone can get started, and many are.

It was the right way to go before the economic collapse, in part because it predicted a worsening landscape. It makes even more sense in a period of slow growth or stagnation. As individuals take up the principles of plenitude, they are not merely adopting a private response to what is perforce a collective problem.

Rather, they are pioneers of the micro (individual-level) activity that is necessary to create the macro (system-wide) equilibrium, to correct an economy that is badly out of balance.

That balance won’t develop automatically. All large-scale transformation requires collective arrangements to succeed. We need environmental accounting, a mechanism to reduce carbon emissions, and an end to fossil fuel subsidies. We need new labor-market policies. We need to reform our health care, education, and retirement security systems. But while we work for those changes, here’s a vision for a way to live that respects the awesome place we call earth and all who live upon it.

The Fundamentals of Plenitude

From the perspective of the individual, there are four principles of plenitude.

The first is a new allocation of time. For decades, Americans have devoted an increasing fraction of their time and money to the market—working longer hours, filling leisure time with activities that require more income per unit of time, and buying, rather than making, more of what they consume.

It’s time to reverse this trend and diversify out of the market.

This doesn’t just mean the stock market, although its recent volatility suggests that’s one market to which this point applies in spades. Today’s smart strategy for many, if not most, households will be to begin a shift away from the formal and centralized sets of institutions and arrangements that are called the market. By “the market” I mean business-as-usual (BAU) economic activity.

BAU is a term that came out of the climate discourse to indicate what would happen if we didn’t address rising emissions. Here I use it to indicate the continuation of the current economic rules, practices, growth trajectory, and ecological consequences of production and consumption.

It especially refers to the large corporate entities that dominate the market and are heavily invested in it. For individuals, relying less on the market spreads risk and creates multiple sources of income and support, as well as new ways of procuring consumption goods.

Concretely, what this means is a moderation in hours of work. For time-stressed households with adequate incomes, it likely means making trade-offs of income for time.

Reclaiming time frees up resources to invest in ecologically restorative activities and creates the opportunity to replenish the human connections that were depleted in the boom years. Of course, millions have had an altered equation of time and money painfully thrust upon them through unemployment or other losses of income.

For that group, which already has a surfeit of time and not enough money, the advice involves moving forward with plans that are less centered on full-time employment in the BAU economy and more oriented to the emergent sustainability sector, which includes both businesses and the parallel economy developing amid the wreckage of the collapse.

This encompasses areas such as household food cultivation, home construction and renovation, and community initiatives such as barter and bulk buying.

This brings us to the second principle of plenitude, which is to diversify from the BAU market and “self-provision,” or make, grow, or do things for oneself. Indeed, the rationale for working fewer hours in the market is not only, or even primarily, about reducing stress in daily life (although that is certainly important). Recovering one’s time also makes self-provisioning possible and reveals a liberating truth: The less one has to buy, the less one is required to earn.

The downturn has accelerated what was already a robust rediscovery of doing for oneself among sustainability pioneers. Plenitude aspires to transform self-provisioning from a marginal craft movement into something economically significant. That requires raising the productivity of the hours spent in these activities. As I argue later in the book, new agricultural knowledge and the invention of small-scale smart machines make it possible to turn household provisioning into a high-productivity—and economically viable—use of time.

These ideas reverse the direction most households have taken in recent decades and contradict what modern economics preaches, which is that specialization, in one skill or one job, is efficient. Specialization may have made sense when the market was offering better returns. Even as wages stagnated, ultra-cheap consumer goods were hard to turn down. Today, in a world of ecological and economic uncertainty and distress, putting all one’s eggs in the basket of the capitalist market looks like a more dubious proposition.

The third principle of plenitude is “true materialism,” an environmentally aware approach to consumption. In the United States, the speed of acquiring and discarding products accelerated dramatically before the crash. Consumers knew relatively little about where purchases came from and the ecological impacts of their production, use, and disposal. But many people do care, and want to lighten the footprint of their spending.

Perhaps surprisingly, the route to lower impact does not require putting on a hair shirt. Nor does it entail making consumption less important. Indeed, the plenitude consumer is likely passionate about consuming, and deliberate in the creation of a rich, materially bountiful life.

We don’t need to be less materialist, as the standard formulation would have it, but more so.

For it is only when we take the materiality of the world seriously that we can appreciate and preserve the resources on which spending depends. Living sustainably does mean we can’t reproduce a lifestyle of gas-guzzlers, expansive square footage per person, bottled water, and outsize paper consumption. But it doesn’t mean we can’t have fabulous clothes, low-impact electronic gadgetry, great local food, and a more leisurely mode of travel.

Plenitude means that you will actually have time to take the slow boat to China if that appeals.

The final principle is the need to restore investments in one another and our communities. While social bonds are not typically thought of in economic terms, these connections, which scholars call social capital, are a form of wealth that is every bit as important as money or material goods. Especially in times of distress, people survive and thrive by doing for one another. Interpersonal flows of money, goods, and labor are a parallel system of exchange and savings.

One casualty of an intense market orientation is that community has gotten thinner and human ties weaker. People haven’t had enough time to invest in social connection outside their primary families. By recovering hours, individuals are freed up to fortify their social networks.

These, then, are the individual principles of plenitude: work and spend less, create and connect more. In turn they yield ecological benefits—emit and degrade less—and human ones—enjoy and thrive more.

You can also enjoy a video of her lecture on Plenitude here:

Juliet Schor is Professor of Sociology at Boston College. Before joining Boston College, she taught at Harvard University for 17 years, in the Department of Economics and the Committee on Degrees in Women’s Studies. A graduate of Wesleyan University, Schor received her Ph.D. in economics at the University of Massachusetts.

Her most recent book is Plenitude: The New Economics of True Wealth (The Penguin Press 2010). She is also author of the national best-seller, The Overworked American: The Unexpected Decline of Leisure (Basic Books, 1992) and The Overspent American: Why We Want What We Don’t Need (Basic Books, 1998). The Overworked American appeared on the best-seller lists of The New York Times, Publisher’s Weekly, The Chicago Tribune, The Village Voice, The Boston Globe as well as the annual best books list for The New York Times, Business Week and other publications. The book is widely credited for influencing the national debate on work and family.  The Overspent American was also made into a video of the same name, by the Media Education Foundation (September 2003).