The following is an excerpt taken from an interview I did with the brilliant Robert Middleton. A lot of my core marketing philosophy, I got from this man.Pay What You Want” in 2011. This material will be compiled into a book called “

Tad: It’s funny. I think it’s actually used a lot more than people would think. We’re all familiar with buskers. Street performers will do it, especially the best street performers. They’ll do a whole, hour-long show and then ask you for money at the end. It’s funny. 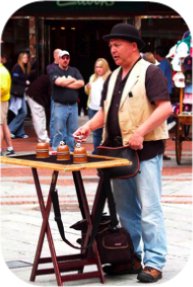 Actually the reason and one of the inspirations for me to do the Pay What You Can was I got mentored years ago by this guy named Gazzo Macee, who’s a British street performer from Oxford.

I remember at the end of his show he said, “Ladies and gentlemen, you just saw this show. Anywhere else you would have gone to see a show like this or if you go to the theater, you’re going to pay $10 to $15 dollars to see a show. You have to pay it in advance. If you don’t like the show you can’t leave. You just got to see the whole show for nothing. I think street theater is one of the most honest forms of theater in the world because you get to see the show first and then you decide what it was worth. I think if you saw this show in a bar, you’d buy me a beer. Beer’s $5. I think this show’s worth $5. If you don’t have $5, $1 or $2 is fine. If you can’t even afford that, please, this show is my gift to you.”

I thought that was so generous and so beautiful. Buskers and street performers use it. Even giving tips at restaurants, I think there’s a bit of a little tipping on performance.

Robert: You pay what you think it’s worth.

Tad: A lot of the live theaters have Pay What You Can matinees. There’s a number. I’m surprised at how many Pay What You Can restaurants there are where literally you go, you eat the whole meal, and at the end there’s no bill. There’s just a pay by donation.

Tad: It’s kind of funny. It’s something I want to do more research into, so I’m not too familiar with it, but I’ve seen enough examples of these restaurants so there’s got to be something to it. A lot of them seem to have been around for years. There’s a magazine I just heard about that’s Pay What You Can. Radiohead, the band, released one of its latest albums online.

Robert: It was “In Rainbows.”

Tad: Right and allowed people to just pay whatever they wanted for it. There’s the Vipassana meditation retreats that some people may be familiar with where people go for this meditation retreat and then pay whatever they can based on what they can afford. There’s a hotel I heard about that did a Pay What You Can promotion. It seems fairly common.

It’s interesting because I think we’re about to see it get a lot more common, just with the economy in such a rocky place right now. There’s a recession and all these woes and everything happening. People are losing jobs. People get a lot more tight with their money. It’s funny. That tightness has to do with the direction of things.

But if they can try it out before paying, hands down one of the most powerful tools or principles that I can ever give anybody in marketing is this idea of risk reversals. It’s identifying what the risks are that somebody might have and addressing those head on.

To me Pay What You Can is not totally risk free, which we’ll get to I guess a bit later, but it really handles a lot of the risk.

It’s funny. When you were talking about workshops, I thought, “My hope is that actually some people might hear this who have been wanting to do workshops but not sure how to fill it.” This might actually inspire them to do it. You can fill a workshop a lot more easily on Pay What You Can than you could charging full rates, and make more money sometimes.