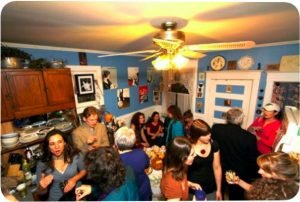 Photo from the Toronto 2009 Green Grub and Gather

So, I think parties are one of the best marketing tools ever. I’ve been talking about it more and more – and here’s some proof! This is an excerpt from an interview I did with Joel Monk (JM) and Laurens van Aarle (LV) of Coaches Rising in Amsterdam. I think you’ll dig it.

JM:            So tell me more about this hot marketing because you’ve really got me going here. Did you say about hosting your parties and stuff?

TH:            Yeah, one of my big things these days has been this idea of parties as marketing. And where this came from was I was in Toronto doing a workshop and I heard about this guy in L.A. who on the Saturday night of his workshops, his business marketing workshops, he would take everyone out for dinner at this Italian restaurant.

I just always thought that was the coolest idea. I felt like, that’s so classy. That’s so nice.

What I liked about it, too, was it created a social setting that wasn’t there at the workshops. Because the workshops I do are super-interactive but it’s still a workshop. It’s not like hanging out with people.

One time I did that and it went really well. I really loved it.

What I found is we went to a restaurant and everyone basically sat at their tables. They were in a big, long row but nobody moved so people were just mingling with the people sitting directly next to them and that wasn’t what I was wanting.

So I tried a few more restaurants, same kind of thing and eventually moved to a house party called the Green Grub and Gather. But as that transition was going, I remember sitting there right before the dinner thinking about, “Oh, I’ve got these other clients of mine who I would love to—from past workshops who I really love—and they should come to dinner.”

So I fired off a few texts and a few of them came. And then it really occurred to me that there are people in Toronto who are super successful already and have just no interest in coming to my workshop. Like there’s a guy, in Toronto who’s a green realtor. He’s incredibly well known, super tapped in in the Toronto green scene. He’d never really come to my workshop. He doesn’t need my workshop. But if he knew about what I did, it would be useful.

People might ask him, say, “Hey, Chris. Seen this marketing workshop for hippies and green businesses. Is this worthwhile?” And if he says, “I don’t know.” That’s one thing. But if he could say, “Yeah, it’s totally worth your time,” that’s a really solid endorsement to have.

And how do I do that because he’s not going to come to my workshop to check it out but he might come to a party. So it eventually evolved into doing house parties for like 40 people. Everyone at the workshop, and I had like 20 people at the workshop so maybe 15 of them actually show up and can make it.

And then I invite my favorite alumni from that area, plus people who are hubs, people who are influencers, people who are connectors in the scene in that area. And that party has been awesome for me in terms of building relationships, building connections with people who I normally probably wouldn’t have had a reason to connect with. Yeah, I could have gone to lunch with all of them but that would have taken a lot more time so I did that.

JM:            I love the idea of getting them all in one place. Because a party’s so relaxed, isn’t it? You’re at a party to have fun and people just let down a lot of those boundaries. It’s just a great place to make a friendship with someone. I could see that being really—I’m thinking about how we could do that. Everybody loves a good party.

But yeah, I don’t know what you think, Laurens, but I love this idea of just having a party. It takes away all that pressure, doesn’t it? You’re just going to have fun. Everyone wants to hang out and maybe get some good music on. What stands out for me from what Tad said is even if you just speak to that guy for five minutes, you’ve already made a connection. He’s already put a face to your name. He knows what you do and he’s probably going to be pretty impressed that you’ve put on a party like that.

LV:            Yeah, it sounds like a great way to both have fun, market, connect, make that human connection with people, expose everybody to what you’re doing and at the same time, just enjoy great food, music and company.

You can listen to the full audio of the interview here, starting with a bonus track of Lisa Hodgson singing Dark, Dark … END_OF_DOCUMENT_TOKEN_TO_BE_REPLACED

Mighty Network is currently building me a membership site MarketingForHippies.com. I've written about 16 eBooks, have … END_OF_DOCUMENT_TOKEN_TO_BE_REPLACED

Rachel joined my Mentorship Program a couple of years ago. She is a healer from Victoria who struggled, as many healers … END_OF_DOCUMENT_TOKEN_TO_BE_REPLACED

Kellita was one of the first people to join my Mentorship Program and, if I’m honest, one of the dearest to me. Kellita … END_OF_DOCUMENT_TOKEN_TO_BE_REPLACED

Sitting around a fire and telling stories at night time. This must be one of the most ancient, enduring and … END_OF_DOCUMENT_TOKEN_TO_BE_REPLACED

One day, I plan to write an eBook called Vibe: The Hidden Mechanics of Why People Buy. It would center around the … END_OF_DOCUMENT_TOKEN_TO_BE_REPLACED

By Julie Wolk These are challenging times to be sure. I have certainly been on an emotional roller coaster these past … END_OF_DOCUMENT_TOKEN_TO_BE_REPLACED

How do you avoid burn out as an entrepreneur? Over the years, I've gathered a number of ideas and this post is me … END_OF_DOCUMENT_TOKEN_TO_BE_REPLACED

In December of 2019, my dear colleague George Kao and I sat down to talk partner marketing and hub marketing together … END_OF_DOCUMENT_TOKEN_TO_BE_REPLACED

Figuring out your Ideal Client. What's the big deal? Why bother? One of the big reasons is because this work can … END_OF_DOCUMENT_TOKEN_TO_BE_REPLACED

Years ago, I read the book Monopolize Your Marketplace. Though the title and tone is aggressive, it has … END_OF_DOCUMENT_TOKEN_TO_BE_REPLACED

There are, in my mind, three roles of marketing. The first is to get their attention. The second is to filter and … END_OF_DOCUMENT_TOKEN_TO_BE_REPLACED

A few years ago, I recorded a video entitled Why I (Almost) Never Do TeleSummits. I recorded it so that I'd have … END_OF_DOCUMENT_TOKEN_TO_BE_REPLACED

If you've followed my work for a while, you know that I'm all about niching. I even created a whole … END_OF_DOCUMENT_TOKEN_TO_BE_REPLACED