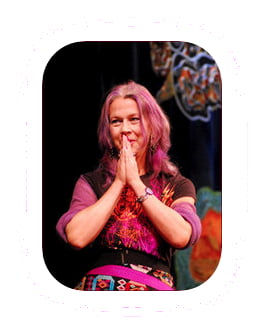 I just watched the most lucid and incredible video about the ways that spirituality and love meet economics and the current Occupy Movement.

In a blog post I wrote on November 18th, I said,

And this all reminded me of a workshop I went to in the summer of 2010. It was called ‘The Compassionate Trickster” workshop. And it was led by Caroline Casey.

I first saw Caroline Casey speak at the Bioneers conference a number of years ago. Instantly, she became my favourite thing. Who was this woman? I’d never seen anyone more spontaneously artful in her language – improvised craftsmanship.

But it’s only now that I’m beginning to understand what she means by the Trickster.

And why it matters so much.

We live in a day and age of so much hidden, obscene devastation highlighted most recently by the devastation in the gulf of the United States. And the oil gushing out was bad enough – but it was made far worse by the cover ups, the lack of media access, the obfuscation. And this is one of the roles of the Trickster – to illumine that which is hidden. The word ‘obscene’ is perfect for so many of the troubles going on today as it translates into ‘off stage’. So many things we will never heal unless we look at them. So much hidden from the eyes of the public.

The Trickster is that mythic part of all of us that comes alive when times are most dire. Unlike Han Solo’s ‘never tell me the odds’, the Trickster thrives on the impossible. The Trickster finds the way out of no way by seeing through the false oppositions created by the ‘reality police’. Even more so – the Trickster sees that these ‘team a’ vs. ‘team b’ dynamics as part of what has gotten us into this mess in the first place.

The Trickster doesn’t take sides, but is on the side of Life.

The Trickster is not interested in giving people easy labels of ‘you’re a redneck’ or ‘you’re a heartless CEO’. What use is there in putting people into boxes and prisons?

but the wise woman

ducks under the moon

and throws keys to the rowdy prisoners.”

The Trickster transcends dualities like Republican/Democrat, Conservative or Liberal. And, while provocative, the Trickster is not interested in creating opposition – but inviting everyone to play. Not polarizing but liberating. Nothing is demonized – everything and everyone can be called forth into the service of life. It doesn’t see the world through the lense of, ‘do i like this? do i approve of this?’ That’s all irrelevant. It only wants to know – ‘how can this be used for the greater good?’

And if it isn’t useful in its current form it can be thrown into Pluto’s Cauldron to be boiled back into what it wanted to be.

The Trickster knows that even the most toxic things on the Earth can be transformed into healing tonic. That every shadow has its light side. That impositions can be transformed into offerings, shame into remorse, constraining certainty into liberating mystery, punishment into restoration, celebrity culture into deep mythology, vengeance into accountability, triggered reaction into creative responses, unconscious rage into wrathful compassion, rape into ravishment, the addiction to purity into a deepening wholeness, seduction into magnetism and the conman into the Trickster.

The Trickster doesn’t just want you – it wants to fullest, most magnetic and charasmatic expression of you. It knows that there’s a right relationship or angle of approach between all things.

There is no time or use for shaming, blaming or finger wagging. There’s no time for posturing – only the passionate and creative protection and upliftment of Life everywhere. There’s no time for the whining and complaining about how bad it is. There’s no time to be caught in instant reaction to the forces that destroy life – but rather the Trickster slows down to go fast and offers up infinitely creative responses because to walk around in reaction is to carry around a portable jail.

The Trickster is capable of seeing things from multiple lenses and holding multiple stories as true at the same moment – but then discerning which story to animate.

The Trickster is that force that wants to liberate ALL forces in the world for the uplifting and healing of Life.

Certainly the Trickster wants to see the abused and exploited protected and safe – but has no interested in punishing anyone. Because, while incarceration and punishment or ostracizing people might work for the moment – in the long term it does not. How many revolutions of hope have imposed far worse tyranny’s than were there to begin with?

“If only it were all so simple! If only there were evil people somewhere committing evil deeds, and it were necessary only to separate them from the rest of us and destroy them. But the line dividing good and evil cuts through the heart of every human being. And who is willing to destroy a piece of his own heart?” – Alexander Solzhenitsyn, The Gulag Archipelago

The Trickster knows that the only long term answer – the only sustainable thing is that everyone is welcomed and everything finds its proper place. Like Sheherizad in 1001 Arabian nights knows – it’s not just enough to get rid of the tyrants (even the ones who have murdered their own hearts) – but to compost Tyranny itself. To change the hearts of the Tyrants. A radical sense of hospitality, equality and democracy is the only true answer to Tyranny.

The Trickster wants to see everyone liberated.

Let’s all get free.