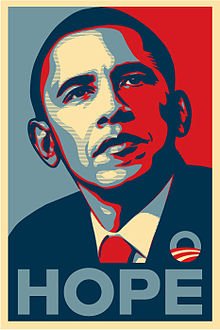 President Obama recently released an ad (you can watch it at the bottom) I thought was worth commenting on – all politics aside. First of all, it reminds me how far the world has come that now video marketing and social media has become so ubiquitous in both politics and business.

Here’s where I think it’s strong.

During the last weeks of this campaign there will be debates, speeches and more ads. But if I could sit down with you in your living room or around the kitchen table here’s what I’d say:

First off he acknowledges the oncoming onslaught of debates, speeches and ‘more ads’. He let’s you know, without collapsing, ‘I get it. It’s ridiculous. I’m with you, I don’t want these either.‘ He’s positioning himself, subtly, as being on ‘our side.’

Then he expresses the desire to connect more personally with people. Where President Obama excels (and Romney struggles) is connecting with people. When Obama says, ‘but if I could sit down with you in your living room or around your kitchen table – here’s what I’d say.’ it immediately evokes warm feelings.

Clearly, sitting down with every American isn’t something he can do, but sometimes just expressing our desire can build a connection itself because it tells the other, ‘I value you.’ You don’t have to be perfect to be in business.

Seventh Generation (the eco cleaning company) has won a lot of credibility points over the years by not pretending to be 100% sustainable. And they’re honest about that. But they let you know they’re still trying.

If you were at a seminar and they said, ‘We would honestly love to give this away for free but we have so many staff with families to support and we charge this much because we need to. If we charge less it’s not sustainable for us’ it can still feel good to have them acknowledge the desire to do more rather than to hear them brag about how much money they’re making on you.

Romney has struggled, especially early in his campaign, to not come across as wooden and stuff. It’s the same challenge that Al Gore had in the 2004 elections. We want to feel some warmth and connection with our politicians, to believe they care. This is where President Clinton excelled. He demonstrated a profound amount of presence and empathy that was palpable.

And specifically, sharing the desire to connect in their home evokes very warm feelings. It conjures up images that are comforting.

When I took office we were losing nearly 800,000 jobs a month and were mired in Iraq. Today I believe that as a nation we are moving forward again. But we have much more to do to get folks back to work and make the middle class secure again.

He then acknowledges the struggles the country was in and that there’s more hard work to do. Where politicians can lose all credibility is when people get that they have no firm grasp on the reality of the situation. If President Obama were to say, ‘Hey, when I got in office things were hard but thanks to me we’re 100% back on track.’ and then didn’t acknowledge that there was more to do – he would lose all credibility.

Billy Blanks of Tae Bo fame gained so much credibility in his infomercials for leveling with people, ‘it’s going to be hard. it’s going to take a lot of work. this won’t be easy.’ 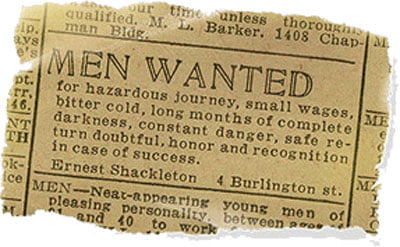 The famous Shackleton voyage posted an ad (read it to the right) which said a similar thing. It’s okay to admit it’s going to be hard as long as you make sure they understand it’s doable and that there’s a plan. Which President Obama now begins to do . . .

Now, Governor Romney believes that with that even bigger tax cuts for the wealthy and fewer regulations on Wall Street all of us will prosper. In other words he’d double down on the same trickle down policies that led to the crisis in the first place. So what’s my plan?

Then contrasts his point of view with Governor Romney’s. Remember people vote for you (with votes or with dollars) because of your point of view. What does any American want from any President? Largely the same things – security, health & prosperity. So, if both candidates are promising the same result, how do you choose? What if you have 100 people in your city saying they can help you get rid of your migraines? Who do you choose? And how?

We choose – in large part – based on whose point of view we resonate with most and trust the most to get us where we want to go. But for most businesses their point of view is unclear. More to the point, it’s unclear how it’s different from their competitors. And since your point of view is so central to your platform (which is ‘what you’re known for’) it leaves people confused – and a confused mind says ‘no’.

First, we create a million new manufacturing jobs and help businesses double their exports. Give tax breaks to companies that invest in America, not that ship jobs overseas.

Second, we cut our oil imports in half and produce more American-made energy, oil, clean-coal, natural gas, and new resources like wind, solar and bio-fuels—all while doubling the fuel efficiencies of cars and trucks.

Third, we insure that we maintain the best workforce in the world by preparing 100,000 additional math and science teachers. Training 2 million Americans with the job skills they need at our community colleges. Cutting the growth of tuition in half and expanding student aid so more Americans can afford it.

Fourth, a balanced plan to reduce our deficit by four trillion dollars over the next decade on top of the trillion in spending we’ve already cut, I’d ask the wealthy to pay a little more. And as we end the war in Afghanistan let’s apply half the savings to pay down our debt and use the rest for some nation building right here at home.

I think his ‘four point plan’ bit is brilliant.

He’s drawing his map for people.

He’s saying, ‘look. here’s how we’re going to get from Island A to Island B‘. Your customers want this too. They’re desperate for it. They’re tired of people claiming they can get them the result and not backing that up with a plan that makes sense.

And most people like numbered lists: four point plans, the seven habits of highly effective people, the five stages of grieving, the three stages of the heroes journey. It helps give people context for where they are in their journey. It gives a reality check and hope that the journey is possible. And a goal with a plan to back it up is so much more believable than one without it – this is true if you’re trying to win votes, customers, volunteers, donors, financing etc.

In my mind, this is where Romney is failing. He’s saying, ‘which tax loopholes will I close down? See me after the election.’ But the whole, ‘trust me’ argument is what people hate about politicians. We don’t want to just trust an offer we want to see the plan that backs it up.

It’s time for a new economic patriotism. Rooted in the belief that growing our economy begins with a strong, thriving middle class. Read my plan. Compare it to Governor Romney’s and decide for yourself. Thanks for listening. Read the President’s plan: http://OFA.BO/SAzDgd

And lastly, he makes a call for action. He invites you to do something. Most ads don’t do this! Most ads might feel good but then there’s nothing for you to do. If you have a welcome video on your homepage I think it should invite visitors to do something (e.g. sign up for my email list). If you send an email out about a workshop, it’s ‘click on this link to read more’. That seems so basic but I can’t tell you how many ads I see that have no call to action. Or have too big a call to action – they ask for too much.

Like, if you saw a poster for a meditation workshop at the organic grocery store and it was a $5000 retreat and the poster was asking you to sign up. No way that will ever work. But, if it offered something ‘free’ you could check out – some kind of ‘pink spoon‘ sample of the ice cream they’re selling, you might just try. No yoga studio will ever sell you on signing up for their teacher training without you first coming to the studio first – so offering free passes is smart marketing. It’s helps people to feel safe in trying you out.