Here’s a provocative and controversial blog post about marketing through the lense of man meeting a woman.

For me, it’s actually not a big stretch because I think marketing is all about building relationships.

Imagine, for a moment, that you’re a man. You’re walking down the street and you see a woman who lifts your heart and viscerally impacts you. She is sitting at a park bench, alone, finishing up her lunch.

And in a moment, she’ll be gone – maybe forever.

You see her and immediately want to approach her.

But so many fears come up: ‘She’s probably busy. I don’t want to seem creepy. I bet she has a boyfriend. She wouldn’t be interested in someone like me. I didn’t shave today! I smell bad. I’ve been rejected before. It’s not polite to approach. I don’t want to be an oppressive male! I’m an ally to women and I’ll support her as an ally by giving her space.’ etc.

So he doesn’t approach. She gets up and leaves. He actually feels relieved.

This same dynamic replays itself in so many areas of our lives. We see someone who could be a client but we never introduce ourselves.

As you read this, I invite you to think about how this relates to your sales and marketing. And the all important notion of creating safety in your marketing.

It’s got more to do with it than you might think. 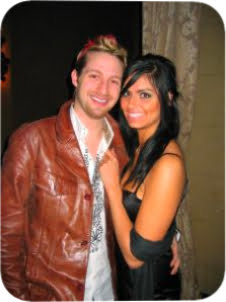 Adam and his wife Amanda

What sets the really successful people apart from those that just fluff their way through relationships is the art of being direct. There are many myths and a lot of nonsense surrounding the direct approach. You may want to print out and keep this email – because in my continuing efforts to help you improve your love life – I am about to share the essentials of going direct that you really should know.

I would be surprised if the contents of this email did not translate to a significant difference to your dating life over the next year – if you apply all the principles we are going to cover. (By the way, if you’re totally new to the subject of going direct it simply refers to the art of stating your intentions truthfully to someone, no matter what they are and dealing with the results.)

First, lets dispel some of the myths about going direct. My favourite myth is ‘the direct approach doesn’t work.’ This ingenious conclusion is arrived at by the fact that you and I know that most people brush off direct approaches from random strangers all the time.

The truth is that whilst a high proportion may walk away from a complete random stranger a good proportion will at least listen to what you initially say. If you have enough qualities of attraction right from the start then the confidence you show by approaching someone directly can often be enough to swing things into your favour, at least to the point that you will have their attention.

Now at this I can hear a number of people thinking to themselves, (girls esspecially) that they would come across as “easy.” However, that isn’t necessarily the case. It’s all based on what you say when you do approach someone.

When done correctly there is almost nothing as beautiful as telling someone exactly what you think about them and having them return that thought with a positive response, as essentially you have just given them a massive compliment.

Though it is important to understand what it is ok to compliment on. Compliments are covered quite extensively in the Personal Study Course so I won’t go over them again here. However, it is important to understand that a compliment should only ever be given on something that is earned. i.e. something someone has taken time over acheiving, and not something they are graced with naturally.

After alot of experimentation I’ve found something that I find works particulalry well.  Feel free to change it or come up with your own, as it’s often better to tailor phrases to your own style. Remember, it is important to understand what each of the phrases represents, and why they’re included.

“Hey, I’m so sorry to bother you.  I’m on my way to meet a few friends but you look really interesting. On top of that, you have a pretty friendly face for someone in the city, so I knew I’d be kicking myself all day if I didn’t take the time to say hi . . . So, hi, I’m Adam“

Now there’s a lot in that.

lets break it down piece by piece;

“Hey, I’m so sorry to bother you, – Being polite is important, it starts things off on a good foot without being rude, and also gives them a reason to pause and listen further. Who knows, maybe you’re lost and seeking directions.

I’m on my way to meet a few friends – This does two things. Mentioning friends shows that you’re a sociable person, so therefore are unlikely to be too weird, at least not so weird that you don’t have friends.  Secondly, it drags out the conversation a little bit more, to ensure they’re standing still ready for the rest.

but, – If used with a pause it creates anticipation, as the word “but” removes the meaning behind everything spoken previously. It says you actually aren’t sorry for approaching and did approach them on purpose.

you look really interesting – Here we have an ambiguous compliment. It is nothing to get too big headed about, and in fact is more likely to generate a lot of questions from them as they wonder what exactly is interesting about them. We all love to hear about ourselves.

On top of that have a pretty friendly face for someone in the city -This really is powerful.  Who could possibly resist being nice to someone who told them they looked friendly? It’s very rare for us not to live up to positive statements made with reference to us. So if nothing else, they are likely to respond positively to you.

so I knew I’d be kicking myself all day if I didn’t take the time to say hi. – This gives a justification for the whole interaction and explains why you actually did the approach.  Otherwise it is almost guaranteed that the first response would be them asking why you’re talking to them.

So, hi, I’m Adam” – This gets things going for the rest of the interaction.

Going direct is an art and science in itself – and you may want to practice many different ways of doing it. There are some fundamentals which you will want to follow. Here are four of them to keep you going:

1) Remember to have as many qualities of attraction as possible. If you aren’t congruent with an attractive person, then it won’t work as well. Imagine being approached by someone lacking confidence. It just wouldn’t inspire you to talk to them.

2) Don’t be afraid to keep going after a failed approach, this is essentially a numbers game until you get comfortable with it. Remember it’s only weird if you genuinely try and date everyone you meet. There is nothing wrong with meeting new people as friends. Re-read the phrase above, you’ll see it works just as well as a tool to meet new people.

3) Always smile- it will significantly increase the positive response rate.

4) Make sure you follow up the initial meeting with a text instantly! It will capture the moment and make it last a lot longer, it will have a greater impact this way.

For more advice on attraction including how to continue the interaction after the initial approach, check out the Personal Study Course.

So, please leave your comments below – what do you think? If you’re a woman – would you prefer a man be direct and honest in his approach over using some other excuse to talk with you? And how does this relate to marketing your own business – or other marketing you’ve experienced.

You can listen to the full audio of the interview here, starting with a bonus track of Lisa Hodgson singing Dark, Dark … END_OF_DOCUMENT_TOKEN_TO_BE_REPLACED

Mighty Network is currently building me a membership site MarketingForHippies.com. I've written about 16 eBooks, have … END_OF_DOCUMENT_TOKEN_TO_BE_REPLACED

Rachel joined my Mentorship Program a couple of years ago. She is a healer from Victoria who struggled, as many healers … END_OF_DOCUMENT_TOKEN_TO_BE_REPLACED

Kellita was one of the first people to join my Mentorship Program and, if I’m honest, one of the dearest to me. Kellita … END_OF_DOCUMENT_TOKEN_TO_BE_REPLACED

Sitting around a fire and telling stories at night time. This must be one of the most ancient, enduring and … END_OF_DOCUMENT_TOKEN_TO_BE_REPLACED

One day, I plan to write an eBook called Vibe: The Hidden Mechanics of Why People Buy. It would center around the … END_OF_DOCUMENT_TOKEN_TO_BE_REPLACED

By Julie Wolk These are challenging times to be sure. I have certainly been on an emotional roller coaster these past … END_OF_DOCUMENT_TOKEN_TO_BE_REPLACED

How do you avoid burn out as an entrepreneur? Over the years, I've gathered a number of ideas and this post is me … END_OF_DOCUMENT_TOKEN_TO_BE_REPLACED

In December of 2019, my dear colleague George Kao and I sat down to talk partner marketing and hub marketing together … END_OF_DOCUMENT_TOKEN_TO_BE_REPLACED

Figuring out your Ideal Client. What's the big deal? Why bother? One of the big reasons is because this work can … END_OF_DOCUMENT_TOKEN_TO_BE_REPLACED

Years ago, I read the book Monopolize Your Marketplace. Though the title and tone is aggressive, it has … END_OF_DOCUMENT_TOKEN_TO_BE_REPLACED

There are, in my mind, three roles of marketing. The first is to get their attention. The second is to filter and … END_OF_DOCUMENT_TOKEN_TO_BE_REPLACED

A few years ago, I recorded a video entitled Why I (Almost) Never Do TeleSummits. I recorded it so that I'd have … END_OF_DOCUMENT_TOKEN_TO_BE_REPLACED

If you've followed my work for a while, you know that I'm all about niching. I even created a whole … END_OF_DOCUMENT_TOKEN_TO_BE_REPLACED

By Julie Wolk Does hiring an assistant for your business feel like a totally dreamy, yet impossible fantasy to … END_OF_DOCUMENT_TOKEN_TO_BE_REPLACED

As you begin to develop your business model, it is helpful to begin with the end in mind. What's your most … END_OF_DOCUMENT_TOKEN_TO_BE_REPLACED