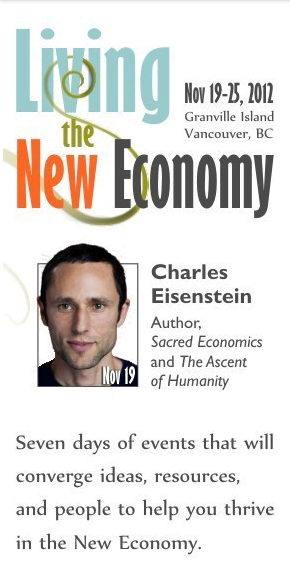 If you’re a social entrepreneur, critical of the political and economic systems of the world (but also visionary about other ways we could do things) and tend to lose track of time in conversations about those things – you might want to come to Vancouver this November for the Living the New Economy event.

It’s all about how do we relate to this thing called ‘money’ and economics in a new way.

I’ll be presenting there and I’m pretty excited about it.

I did a little interview with Nicole Moen who’s one of the main organizers of the event to give you a taste of it.

What is the name of the project we’re featuring here?

What’s the story of how this came about? What was the need you saw in the community that it emerged from?

At 3 am on May 19 I woke with the dream-like download that the next big project had to be about money and it had to involve bringing Charles Eisenstein to the West Coast. That was really all I knew at the time, I just went with it, and I emailed my business partner in event production, Geoff Gosson, to ask if he was in. He was.

It was in retrospect that I realized what that hit grew out of. I’d just completed a series of interviews of mostly entrepreneurs and one of the main themes from that was that each person had struggles of some sort with their financial worlds.

I’d been on a personal mission to learn more about money and increase my own financial literacy and decrease my own inner “stuff” on the subject for the prior year. I had also become aware of the book called Sacred Economics by Charles Eisenstein and was intrigued by his work to shift our economic paradigms. And of course, everyone is speculating about where the economics of our world are heading. All that had been rolling around inside and voila! a 3 am hit.

The Healing Cities Institute was interested in hosting the event as the subject is in alignment with several of the Dimensions of a Healing City, particularly Healthy Prosperity. Right away, Geoff and I determined that we would start small and sustainably, just Charles initially (fortunately he agreed to come!), and allow the project to grow as it needed to along the way. A few conversations later with key people and it grew FAST! and is now a week of events for entrepreneurs, entrepreneurial groups and anyone interested in learning about what is emerging. It is called Living the New Economy.

Can you share a few examples of how your project works?

Although the event is open to everybody we are putting special attention on the needs of entrepreneurs and entrepreneurial groups such as social enterprises and co-ops. The week will guide participants through a set of skill-building workshops and networking opportunities to help clarify their project idea, refine their business approach and potentially pitch to investors.

Events include Financing the Future, Marketing with Integrity in the New Economy, Easing the Money Struggle, Making the Pitch, the Fish Bowl (happy Dragon’s Den), Opportunity Fair, Mentoring… plus a concert, poetry slam and film screenings.

What’s the response been so far?

We’ve been blown away by the response from people. It’s like there’s a ravenous hunger out there for opportunities, ideas, people to talk to, collaborations, reassurances, new models, new mentors about money and our economy.

Who do you find it’s working best for?

How did you promote this in the beginning? What were the top three most successful approaches at the start of it?

Well, this IS the beginning and we are experimenting with the most successful approaches. Reaching out to aligned organizations and individuals and exchanging in-kind value, i.e., offering event partnerships and E-passes.

What are the top three most effective current ways you’ve found to market this?

Through outreach to aligned organization and their networks.

What are the three biggest lessons you’ve learned along the way?

What’s the next level for your project? What are you most excited about that’s coming up?

We hope to do another similar event in May 2013 and monthjy one day events in between November and May. There is a need for an ongoing conversation to keep developing, manifesting and funding new ideas.

At it’s heart, what is this project/business really about for you? (beyond money, status and such).

Responding to a need. We are convenors and we are hearing that people need to come together to talk about economic options, to talk about their fears, to come up with new ways forward, to connect with and support each other, to dig deeper into their minds and hearts and really live their gifts.

What parts of the new economy event are you personally most excited about?

When two or more people come together with the same intent, our wisdom and energy expand exponentially. We all benefit and those benefits ripple out to those not directly gathered with us.

Specifically, we are excited about The Fish Bowl, a gentle version of the Sharks’ Tank or Dragon’s Den when a number of our E-Pass participants will have the opportunity to pitch their ideas to investors for prize money.

What’s your biggest hope of what might come out of this event?

My biggest hope is that LNE will inspire and transform the people who attend. That the skills, resources and relationships each has gathered will help bring great ideas into manifestation faster and with resilience.

If people want to find out more about your project, support it or get involved – what should they do?