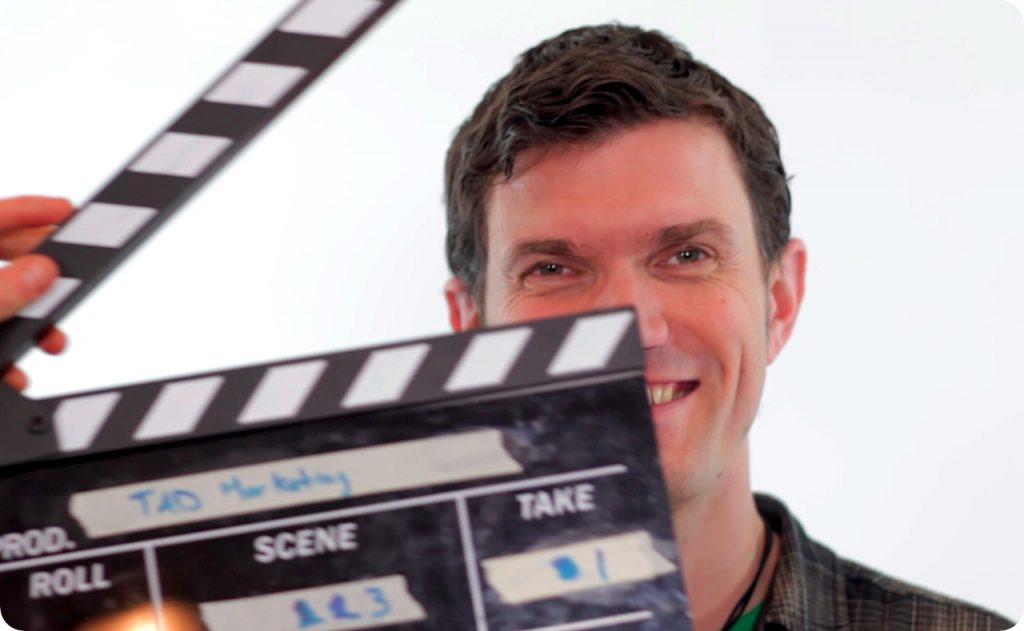 A few days ago, I invited people to weigh in on which welcome video was better – my old one that I made myself or my new one made by Donna Santos.

The overwhelming majority felt the new one was better.

You can learn my basic take on how to make a great welcome video here (and also check out this new one from my colleague Colette Kenney).

Here’s what I learned from the process about welcome videos:

lesson #1 – open body language: my arms were crossed for the first part of it and some people felt this was ‘closed’ body language.

“In the new version, your experience shines through your words, however, your crossed arms and hunched shoulders make it appear that the experiences you’ve had in doing this work have taken a lot from you. . I found I was holding my breath until you finally moved your arm and opened up the space. I would actually like to see you talking about Marketing for Hippies while standing up.”

lesson #2 – eye contact: look into the camera directly. Imagine you’re speaking right to the person who’s visiting your website the way you’d speak to them if they were there in person. Eye contact. This creates warmth and connection.

lesson #3 – the thumbnail matters: when you see a video there’s often an image paused from halfway through the video. Always at the exact moment when you’re drooling with your eyes half closed. I’ve heard that, on Youtube, you can edit the video to change this to one that’s not so appalling. I’m going to look into that.

“To be honest… ugh… sad admission… I never watched the old one because I didn’t like the first opening screen shot, it didn’t make me want to click. Ever. In, like, 3+years. So this is definitely an improvement.”

lesson #4 – be careful with humour: the hippie jokes at the end were funny to some and offensive to others (‘how dare you make fun of hippies!!’). I tell those jokes all the time at my workshops and people love them. And it made me realize that a welcome video might not be the place for unnecessarily controversial jokes. I’ve got other jokes I could use. Controversy can be great. Taking a stand and having an opinion is important – it can really draw people to you. But creating controversy for no big reason? Not much use. I’ll likely get those jokes changed.

lesson #5 – lighting: this matters! the new one is so much better lit than my old one. this is something that a professional can help with big time. you might not have the kind of equipment you need.

lesson #6 – home spun is good: another valuable lesson – almost no one hated the old one. most people still liked it. you don’t have to go pro to have it work.

lesson #7 – closer is better: a number of people commented that the old video felt a bit more intimate because it was shot more close up than the new one. i felt more distant in the second one because I was further from the camera. i think being close to the camera made my right arm look fat . . .

“The only problem with it is you seem a bit far away and hidden behind the desk at first, but I quickly forgot about that as you are so charming. Great job!”

lesson #8 – don’t confuse them: we put in a bit of me doing a card flourish and a magic trick – but it’s not explained that I’m also a close up magician. so it’s confusing to people. entertaining but – if you don’t know i do that it’s a bit like, ‘wahh! why’d he just shove a pen up his nose!!! Mostly people loved it – but a few people didn’t understand what was happening there.

“If I were here for the first time, as a visitor and not a film critic, I would have clicked the stop button at 1:20 when the music kicks in and the magic tricks start. That part showcases your entertaining side, so we know you’re more than a talking head (which I know from attending your workshops). But it’s distracting, confusing and does not flow. Chop it. If you want to keep it, I believe it belongs elsewhere, as part of a get-to-know-me-more video. I find you very entertaining, and others should have a chance to see that side of you, but, another way in another place. Just my humble opinion.”

“I like the little bonus of showing little bit of who you are in the end…but the people who see you at first time may not understand what that is all about!”

lesson #9 – formal vs. professional: an interesting distinction someone lifted up for me. Formal means you’re being really stiff and wooden and there’s no warmth. Formal is likely the result of trying to script things and then losing all the spark of life from it. People want to feel YOU in the video. The role of a welcome video is not just that you convey information – but also that they get to ‘feel’ you and your vibe. Professional means you’re on point, staying focused, not being self indulgent, being of service, being clear etc. Be professional in your video – but don’t be formal. People like warm, human and quirky. One of the main noticings of my new video was that it felt a bit more formal and slick than my old video. Ultimately, I want one that is focused, warm, professional – but not at all slick or professional. Tinkertinkertinker.

“The new one is more polished, yet not over practiced”

“I liked that you were closer (larger) in the older one, the colour seemed a bit brighter. Somehow the older one was a bit quirkier, and not perfect, maybe that’s what I found more appealing. You somehow conveyed the information so that I cared about it a bit more. If you could just squish the two videos together… The first one with the spunk and without the fumbles and throw in the fun clips at the end.”

“The old one was like visiting an old friend. The new one was better for making new friends.”

“warm & easy way when you communicate. There’s also something non-judgmental in your attitude in both videos which puts the viewer at ease. Your authenticity comes across which is the most important thing.”

lesson #10 – tell them how the free stuff will help them:

“Structurally, there is one potential gap for viewers. You are clear on the audience, their problems, and highlighting free/important bits. The gap is this: how exactly will the free bits help relieve their problems? Perhaps it feels obvious. Still, I suspect that if it were more explicit, it would make the freebies more logical and appealing to your audience. You gave a clear problem:solution link for your marketing diagnostics, and that bit works well.”

lesson #11 – positive language: one person noted that my language felt clearer and more positive in the new video . . .

“The language in your new video has more positive connotations, and thus, it is more appealing. For example, you moved from “Thanks for stumbling across the Web site.” to “Thanks for finding my Web site.” You also changed “There’s just a few quick things I wanted to flag…” to “The main thing I want to say is…”. Flagging has negative connotations (warnings, problem areas, emergencies), while “The main thing I want to say” tells listeners that you’re getting right to the point, ostensibly because they appreciate clarity, and brevity.”

lesson #12 – web cam vs. someone else filming: I never would have considered this – but there’s something about the interaction with the person filming you that will likely bring out your human side in a way filming it all by yourself won’t.

“Before I met you I’d already seen the older welcome video. And then when you started to speak that day at IHN I was totally surprised because the way you are and the way you presented yourself in that video did not match up at all. You are a very dynamic speaker. You are comfortable, animated and warm. Yet in that video, you pause a lot, you seem uncertain, you say “um” a lot. Realizing how different you are was a pleasant surprise, the key word being surprise. You were better. Are. Are so much better.

Here’s what I think it is: you feed off the crowd. You are so good with people and you seem to draw on their energy, use that to give more back. With the video that is Tad + webcam, it is obvious that you have no audience to feed off of. But then a real person filmed you, and you came to life.  That would be the person I would hire.

So it’s a no-brainer to me. From awkward and incongruous to who you are in real life, to something just so appropriate and charming, clean and confident. Even fun. Well done Tad, it’s a keeper.”

lesson #13 – get to the point: there was a lot of feedback saying that it was clearer faster who it was for in the new one. But also that I talked faster than was ideal. So, get to the point – but don’t rush your speech.

“The new one is clear as to whom the video is for … i.e., for those having trouble with marketing. The initial one is good and likeable but I wasn’t certain where the conversation was going. I don’t like the words ” thanks for stumbling into …etc”. It makes me feel like perhaps I took a wrong turn in my search for whatever”

“your intro lets me know who your blog applies to (your niche) so I know right away if this is for me or not.”

“The first 1:20 of the new one is perfect. Relaxed and genuine, and also organized, and tells the visitor specifically what to do to get something useful. I followed it easily and appreciated the information. The old one was too vague (this site has stuff) and did not keep my attention.”

“I really don’t care about your website – I want to know how I can make more money marketing on the internet.”

“Considering the visuals, the new one is much easier to watch. The composition of the old one had my attention split, as my brain was trying to figure out what to focus on (your eye totally stops on the painting to the right).”

“The background in the first one is too distracting. I found myself looking around at the guitar in the background and out the back window and always back to the art in the foreground”