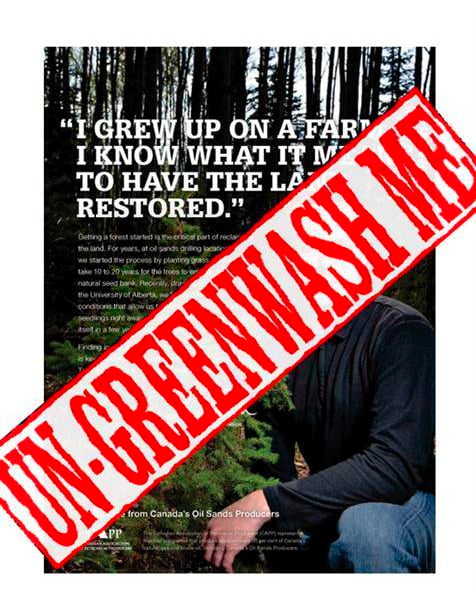 Greenwashing. It’s when a company makes a big deal about being green and being committed to sustainability but in reality doesn’t do much. It’s like goodwashing – where people laud the fact that they give so many crutches out to the crippled – ignoring the fact that their factories and mines are what cripple them.

I live in Edmonton, Alberta and a few hundred miles north of me are the Tar Sands – one of the largest and most environmentally destructive projects on the planet. It’s hard to describe. Think Mordor from Lord of the Rings and you’ve got some idea.

Of course, it’s no good if the masses think that it’s that bad (even if it is). So, a huge campaign has come out to greenwash the tarsands. Much like BP is engaged in a huge campaign to convince people they really care about cleaning up the Gulf.

Luckily, marketing has all sorts of uses – and in this Greenpeace project (sent to me by Mike Hudema) you’re being asked to use your marketing savvy to UNGreenwash the Tarsands. I encourage you to check this out and contribute – and spread the word.

Faced with the grim realities of tar sands oil extraction, the Canadian Association of Petroleum Producers (CAPP) seems like it would rather take its dirty money and run a huge publicity campaign to make the tar sands look better, than actually address the pressing environmental and human rights atrocities caused by tar sands development.

CAPP is trying to greenwash the destruction that is taking place in Alberta through a series of print and video ads. Check them out here – http://www.capp.ca/oilsands/ads/. They must think we’re stupid to believe what they’re feeding us: that everything in Alberta is A-okay. But we’re not stupid; like you, we know that everything is not okay in Alberta. And we need your help to make sure CAPP doesn’t get away with its latest dishonest game.

Toxic tar sands tailings lakes already span 170 square km, which is an area larger than Lake Muskoka, and they are growing every day. Downstream, primarily First Nations communities, are seeing increased sicknesses in their communities, seeing a traditional way of life becoming further displaced and many are afraid of drinking the water.

The spin campaigns waged by CAPP, as well as the Alberta government, are a direct response to the pressure that you’ve helped us generate.

It is time to show CAPP that any attempt to greenwash the tar sands will not go unchecked.

We are looking for your help to culture jam these ads: