My dear friend and colleague Ryan Eliason has put together a video presentation about his upcoming business training for social entrepreneurs. I just finished watching it. And it. is. good.

I want to encourage you to watch this (whether or not you decide to participate in his training). I think this video is a great example of a few key marketing lessons. Ten of them in fact.

I’ve laid out the ten lessons below that I’d love for you to take from this and, as per usual, I’ve loaded this blog with a tonne of links to posts I’ve written on key topics and useful resources to help you get the most out of this as possible.

Context is important here. If Ryan were simply to make this video, put it on his website and hope that people signed up, he’d get very little response. This video is a part of a campaign with a start date and an end date. It is being introduced to people (like you) through people they trust (like me). It’s also being shown to people who have taken part of five very content rich teleseminars that have been leading up to Ryan’s 21 week program. That’s important. People aren’t seeing this video with no context. And they’re only watching it because they’re a socially conscious solopreneur who wants more money and more free time and they are curious about what Ryan has to offer at this point.

There are lots of kinds of videos you can make. You can make a video for your homepage, a bio video, a blog video of just you sharing to the webcam some new thing you’ve learned. But you can also use a video as a direct ‘here’s what I’ve got and here’s how much it is’ offer.

In marketing baseball terms, most people are already on second or third base by the time they watch this video. There’s already at least curiousity but likely some trust and excitment by the time they hit it. 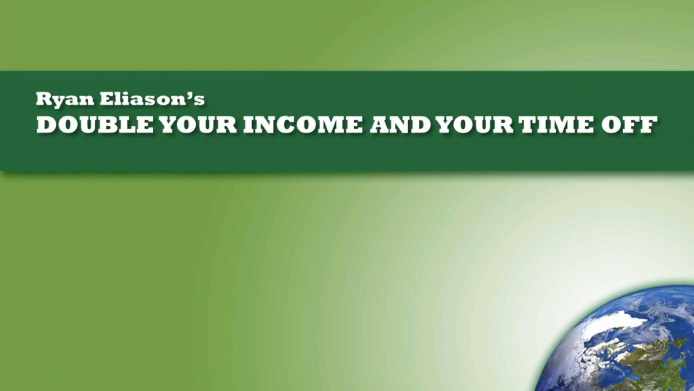 Ryan demonstrates how to be respectful, direct, understated, down to earth, grounded and matter of fact in your presentation (vs. over the top, too enthusiastic, pushy, aggressive and hyped up). This is something my colleague Lynn Serafinn wrote about in her book, ‘The Seven Graces of Marketing‘. And I’ve written about it in some blog posts about this idea of resonance and also in a recent blog post ‘Nine Thoughts of Copywriting for Hippies‘. He does this by acknowledging that not everyone will be able to get the same results. He acknowledges the limitations of his own program based on where people are at. To me that is so incredibly credibility building.

What if we used marketing as a filtering process of attracting only who’s a perfect fit (vs. trying to sell everyone into your programs). If you’re just in it for money? It’s not a fit. It’s powerful to not only say, ‘Here’s who my program is a fit for,’ but also ‘Here’s who my program is not a fit for.’ People feel immensely respected when you let go of your attachment to making the sale just lay out clearly who your program is a good match for.

This video powerfully uses the power of case studies and success stories of your clients (e.g. in his case a naturopath, fair trade tea company CEO and a relationship coach). These establish credibility but also give clarity about who his program might be a fit for. Stories are so powerful in marketing. My colleague Casey Hibbard wrote a brilliant ebook on this at www.storiesthatsellguide.com. And you can also check out the excellent work of Michael Margolis at www.getstoried.com or read my blog posts about using stories effectively in marketing.

Here’s where I think this video really excels. It demonstrates the power of sharing your clear point of view about the best system to get from Island A to Island B.

Ryan does a solid job of laying out his take on why most socially conscious entrepreneurs don’t get the results they are craving. He breaks down the elements (in his case eight of them) and makes the case that if you’re missing even one of these it’s like a leak in your boat (which is a great example of effectively using a metaphor to sum up your business).

And so, if you are missing multiple elements then you have multiple holes in your boat. In my workshops, I will talk about the three foundations of your marketing or the six elements of a successful platform. These types of maps and systems are extremely useful in helping people self diagnose themselves and see if what you’re offering can be a fit. Think also of: The Seven Habits of Highly Effective People, the seven chakras, the five elements of chinese medicine, the four directions etc. Maps.

After all, someone might watch this video and think, ‘You know what? I’m really solid in all eight of these.’ and, wonderfully, realize that Ryan’s program isn’t a fit for them (thus saving dozens of hours and hundreds of dollars that would have been wasted if they’d been hyped or pressured into it.

But, if they are lacking in some of these areas then it’s likely they’ll lean into wanting to work with him. Ryan doesn’t just list the outline of his course and hope that people ‘get it’. He makes his case. He says, ‘Here’s what I think you need to make this journey and here’s why I think you need it.’ Again, he’s very direct. And direct is respectful.

LESSON #5: Sharing your Why.

Ryan does a great job hear of repeatedly coming back to his ‘why’ of making the world a better place through seeing socially conscious businesses succeed. His why comes through in a number of ways. Many programs wax on and on about ‘don’t you yearn to make a difference? have a bigger impact?’ and it honestly makes me gag sometimes because it seems soooooo overly, earnestly sincere and like it’s trying so hard not to be marketing.

I’d rather someone just made their case directly. And, frankly, I don’t think trying to sell someone on your services based on altruism and ‘doing the right thing’ ever works. People do things because there’s something in it for them. Find that. Speak to that. But, if people get that you can help them get a result they’re craving and relevance has been established then your ‘why’ (the deeper cause of your business) becomes incredibly compelling. How does Ryan communicate his why?

It comes through in his voice.

His program is targeted towards socially conscious entrepreneurs.

It’s not enough to just mention your ‘why’ once. If you really want it to land for people then you need to come back to that again and again and again.

LESSON #6: Speak to the Impact.

You need to speak to the impact. You need to speak directly to ‘here’s what’s in it for you.’ If all Ryan did was speak to how cool he thought his program was he’d lose people. And that’s a huge mistake that so many people make. Instead of talking about the journey they take people on from Island A to Island B – they talk about the boat. And, as I wrote about in a recent blog post, no one cares about your boat initially.

Even the title of Ryan’s program, “Double Your Income and Your Time Off” speaks directly to this. People don’t want to sign up for a business coaching program. But people do want more money and more free time. They want to feel more confident. They want to make a bigger different. Speak directly to what people are craving.

Ryan anticipates a very likely concern that will come up for most people who’d be drawn to his course, ‘But my business is different.’ And then he addresses it directly. If there are common questions and concerns that come up from people, risks they’re afraid they’ll have to take in if they work with you, address those head on. It will have your sales letters feel like much more of a conversation because you’re acknowledging what’s happening for them on their side.

Okay. This should be #1 really. This program is focused on a particular niche. It’s a bit broad but it seems to work for him. It’s for socially conscious solopreneurs. It’s what I’d call a big circle (and in the video he lists lots of the little circles that fit inside of it). You can read my thoughts on Big & Little Circles in niching here. But Ryan is not niching by industry or age or geography (demographics) he’s niching by type of business (socially conscious solopreneurs), a core problem (not enough clients, time or money) and focuses heavily on psychographics (the internal values, worldview and communities they’re a part of).

Ryan takes the time to go through his program and make sure that people get the impact each piece could have. He makes sure that people know how much each piece is worth on its own so that, when you get to the final price, it’s clear that you’re getting good value for your money. If I had to sum up marketing in a single sentence, I’d borrow Mac Ross’s words, ‘Marketing is about establishing the value beyond the immediately apparent.’ Don’t assume that people ‘get’ how valuable your stuff is. If they don’t appreciate it, that’s your fault, not theirs.

Ryan also does something compelling in the powerful reframing of the cost of his course as an investment. And he doesn’t do this in an offhanded way. He makes the case systematically. Communicate the value of what you do.

This lesson is sort of implicit in the presentation itself but I want to flag it.

Your programs that you offer likely have a lot of of aspects to them. They’re not so simple. And, sometimes, it just takes a while to really communicate everything you’ve put together to help people. But many people are sick of the long scrolling sales letters. So, Ryan lays out another option in dealing with this – put it into a video. If you were to take the transcript of this video and put it into a long copy sales letter – it would be pretty long. But, for some reason, video is often easier to digest for people. It’s something to consider as an option. You can read my posts about writing sales letters here.

If you’d like to see other posts of mine on the power of video marketing just click here.

Want Help? If you’d like some more direct guidance and hand holding on figuring out your niche then go and check out my Niching for Hippies coaching program https://marketingforhippies.com/niching-for-hippies/